A history & introduction by Principal, Robin

Dance classes have been held at Keymer Church Hall for many years. In 1987 the existing school Principal retired and a dear friend of Robin, whose daughter attended the School, contacted her knowing she was a dance teacher. Let’s Dance! (Hassocks) was ‘born’ on Saturday 7th November 1987 with Robin (Irene Bates) as Principal and sole teacher.

Robin was given her ‘bird’ name when she became the Guide Leader of 1st Hassocks Guides which she ran for 10 years.

The bird theme continued with all classes being named after birds. Naming the school Let’s Dance! seemed to identify Robin’s aim to teach dance with an element of fun!

It was not long after opening the school that the first show was being organised. This took place on 29th April 1989. All proceeds were given to the NSPCC.

From the beginning Robin wanted monies raised from the performances to benefit children’s charities. It was decided that the shows would involve ‘Children Dancing for Children’. As well as being very rewarding for Robin, pupils and families, lots of fun has been enjoyed over the years!

Opening the school with 40 pupils both Adult and Children on a Saturday morning private classes were soon being taught in the back room of Keymer Church Hall on Wednesday afternoons. The school quickly grew to over 200 pupils attending classes four days a week with ages ranging from 3 years to adult.

Let’s Dance! also charitably entertains the less able elder citizens. For several years pupils and helpers travelled to Merton in South London on a double decker bus at the invitation of the Merton Lions, of which Robin’s parents were members, to entertain at the Lions Spring Supper held for the local community housebound.

Numbers from shows, country dancing, maypole displays and Line Dancing have been performed at various fetes, fayres and care homes over the years.

For many years a float was decorated in keeping with the theme of Hassocks Summer Fayre. Parents spent the morning of the event decorating a Corralls lorry for the parade and pupils dressed up to ride through the village from Hassocks hotel to Adastra Park… then entertain.

Over the years three generations of the same family have attended classes with Robin.

Outside of the School Robin has choreographed for local musical theatre productions and pantomimes.

So far over the years in excess of £64,000 has been raised for various children’s charities by the School… long may it continue!

Robin started dancing at the age of 7 on the advice of her Doctor who suggested it would assist in the management of her asthma and bronchitis… and it did! Within a couple of years she was completely in love with dance attending classes three days a week.

She lived to dance and performed in various shows and festivals as well as entering syllabus and medal examinations.

Having gained her teacher qualification and to the dismay of her parents she decided to discontinue dancing… perhaps being a ‘Swinging Chick of the 60’s’ and working in London had something to do with it!

However her Mum and Dad were over the moon when, now married with three children, Robin opened her own School… Let’s Dance! (Hassocks).

Robin’s family have always been very supportive and play a big part in the School. Her husband John videoing shows, laying stage flooring, sorting programmes and posters, transporting maypole, props and various equipment to events. Damon, her eldest, has been ‘Sound Man’ for shows and examinations. Her elder daughter, Zoe, has danced and performed in many of Robin’s shows over the years… even tap dancing with her Mum to entertain residents at Valerie Manor where she has been owner/manager since 2008. Adults and pupils from Let’s Dance! annually entertain there.

Recognising youngest daughter Sally-Ann’s passion for dance and having gained her teaching qualification, Robin decided to hand over Wednesdays to introduce Point4 Modern Classes to the school.

In September 2011 whilst continuing her role as Principal of the school and still teaching adults, Robin handed over most of her classes to Sally-Ann whose enthusiasm and teaching qualities have surpassed Robin’s dream of keeping Let’s Dance! (Hassocks) alive! 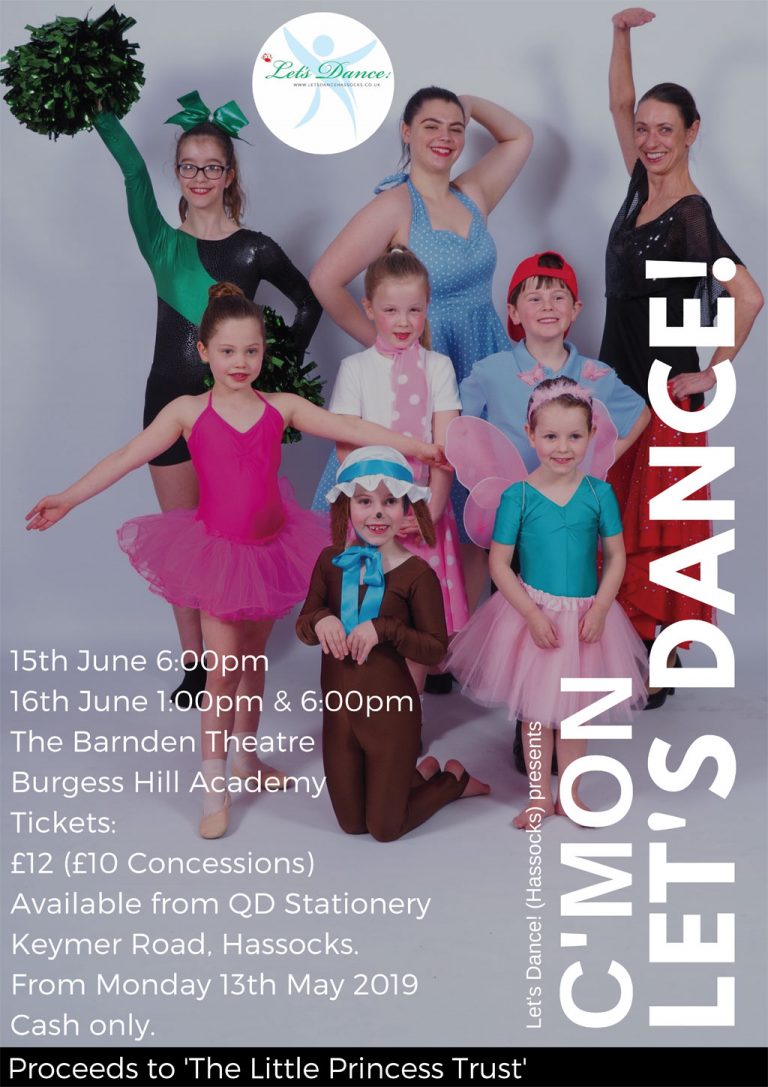 Want to get dancing?

Feel free to get in touch to find out more. We'd love to hear from you!
Contact us